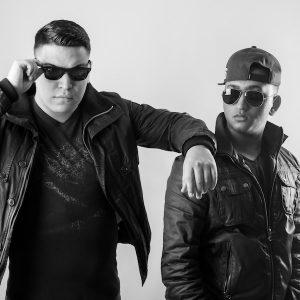 In early 2011 Dave & Jordan, both two separate DJ's discovered they shared the same home town. Linking up one summer night they came to find they had a bright future as a duo. David, whose sound was heavily influenced by the New York Tribal & Tech House sounds together with Jordan who had a background in Progressive & Minimal House was a fusion of sounds was like no other. The chemistry in the studio was magic and it was clear that their musical interest was meant to be something more and so DIGITAL JUNKIEZ was born.

From opening the main floor of Pacha NYC to Headlining Beta Nightclub in Denver CO, the boys have slowly but surely learned the ins and outs of their craft. And after spending 3 years in the studio things started to gain traction on the production end.In early 2013 the duo had landed their first official record, Drumfired, in the Top 100 of Beatport, and it wasn’t long until they returned to the charts with their collaboration with Manufactured Superstars, in the top ten of Beatport overall.  Having collected a mass amount of support from the industry’s biggest and baddest artist, such as Steve Angello, Axwell, Tiesto, Shapov, Kryder, Tom Staar, Dimitri Vegas & Like Mike, Marcus Schossow, Danny Avila, Deniz Koyu, Thomas Gold, Sick Individuals and many more.  Digital Junkiez have stepped into 2017 strong, with releases on Feenixpaul’s Eclypse Records, & Official Remix’s under SONY, as well as collaborative efforts with the likes of FMR’s Mikael Weermets, Code Red’s Dirtywork already under their belt. And now as they begin their new direction in sound, they start off the year properly with the release of their record Damn Girl on the legendary home of Kryder himself, Sosumi Records!