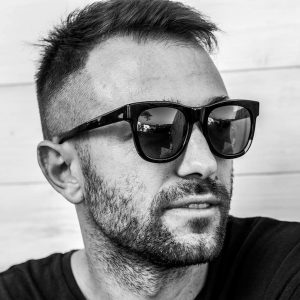 Marco Carpentieri is a top-notch Italian DJ and producer who has been smashing the national club scene for many years, registering sold out events every time he plays. Among his most striking performances it is worth to mention: The Club and Hollywood in Milan, Amami in Treviso, Molo 5 in Mestre, Gilda in Rome, El Divino in Naples, Sottovento in Porto Cervo, Shed in Varese, Zapata in Stuttgart, Rose Bar in Cancun, and exclusive parties such as the 66th Venice International Film festival closing party, LeSilla in Milan, Bulgari (St. Moritz).

The artistic career of Marco Carpentieri is focused on music production. He is one of the few dj producer to be a musician as well. Many of his release have found success in Italy and abroad. Among his well-known titles: El Pasito, Catch Me, Dreams and Call My Name, This is Love, Yuma, all published on famous labels such as Ultra Records, Dirty Dutch, Pinkstar, Eclypse Records, DoItYourself and supported by international dj’s like Blasterjaxx, Max Vangeli, Moguai, Tiesto, Chuckie, EDX, Tommy Trash, Antonio Giacca, HIIO, Dj’s from Mars, Feenixpawl collecting appreciations from radios and clubs to itunes charts and Beatport.

In his career, Marco boasts experiences in important Italian radio networks such as M2o and Radio Kiss Kiss among the others.

Thanks to its tireless work, search for new music and stunning energy, he managed to make crowds to dance as well in a multitude of international clubs in Poland , Switzerland, Finland, Germany , France and Mexico.