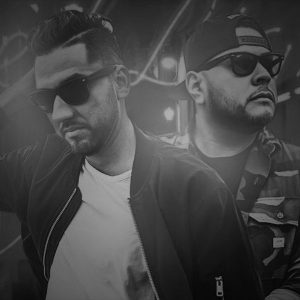 NXNY is Dj NoDoubt & Xavier Murillo In 2008, two graphic designers turned disc jockeys, begun a journey of discovering new music to inspire their creativity during their long hours at the Artek headquarters where they met. The simple intentions of their artistic freedom, led them to find yet another formula to release their creative expressions through the art-form of music. NoDoubt, who was already an experienced DJ booking NYC clubs frequently; immediately fancied the idea of NXNY.

While their musical taste isn’t limited to any genre; they developed a deep passion and ear for house music. In 2010, Xavier and NoDoubt felt confident enough to create their own mixes and so they begun booking sets at various local clubs in the city; and eventually, they landed weekly residencies at some of the swankiest clubs & lounges in NYC such as Le Souk, Greenhouse & The Dream Hotel. Influenced by international stars like DJ AM, The Swedish House Mafia and The Martinez Brothers; the two were quickly known for their diverse sets and eclectic mixes: combining electro, progressive, tech house and hip-hop.

They continue to frequent sets in the NYC area but have made the overseas jump and traveled to europe for various different sets during the summers. Today, they’re producing remixes, original tracks and working hard to develop their signature style with the right blend of sounds and textures that has something for everyone.