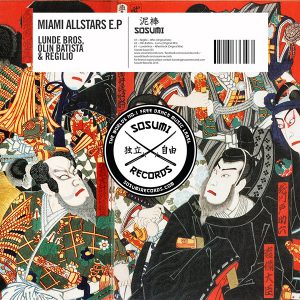 After a massive 2015, Sosumi is back for 2016 with a bang!! Just in time for Miami we bring you 3 fresh new tracks that will light up Miami Music Week! To kick things off, Sosumi welcomes Dutch producer Regilio with his Sosumi debut ‘Who’. This track takes you back to the warehouse raves of the early 90’s bringing the sound to a new generation of listeners!

Then we bring the long awaited ‘Luma’ from up and coming Brazilian producer Olin Batista. With its infectious brass groove and thumping kick drums you feel immersed in the party spirit of the Rio carnival with this track. Finally we welcome back Sweden’s Lunde Bros with their follow up to ‘Death Star’. ‘Aftershock’ is a electro tinged monster with loads a tribal groove running right through it!