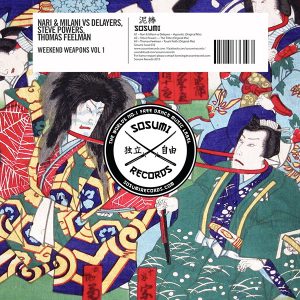 To finish off a massive year for Sosumi Records we deliver a trio of tracks that have personified ‘The Sound of Sosumi’ in 2015. To kick things off, Sosumi welcomes back the Italian powerhouses Nari & Milani – this time teaming up with fellow Italians Delayers, to create a ‘Hypnotic’ twisted, bass-driven sound, with plenty of groove to get your feet moving on the dancefloor.

Then Steve Powers brings the drums with the aptly titled ‘The Tribe’. Expect plenty of percussion, tribal chants and of course lots of groove! Finally a mysterious ID that has been doing some serious damage in Kryder’s sets since summer and has been creating a storm online; ‘Touch Faith’ from Thomas Feelman slowly builds to a point of euphoria then the kick drum drops into a deep, dark twisted beat that will get your shoulders rolling, head nodding and feet moving!